One of belgium’s most beautiful places

Durbuy – The smallest city in the world

Even though Belgium is our hometown, we only visited Durbuy once… Shame on us. We drove off to Durbuy in November 2018. Autumn is the perfect time to enjoy the beautiful architecture in this medieval city, combined with the beauty of the changing colours in nature. The lovely thing about Durbuy is that it’s not packed with tourists and most people you come across are Belgian people visiting for a day or a weekend. In contrast to Bruges or Brussels, there are less international tourists and that’s a good thing for anyone who wants to visit Durbuy. 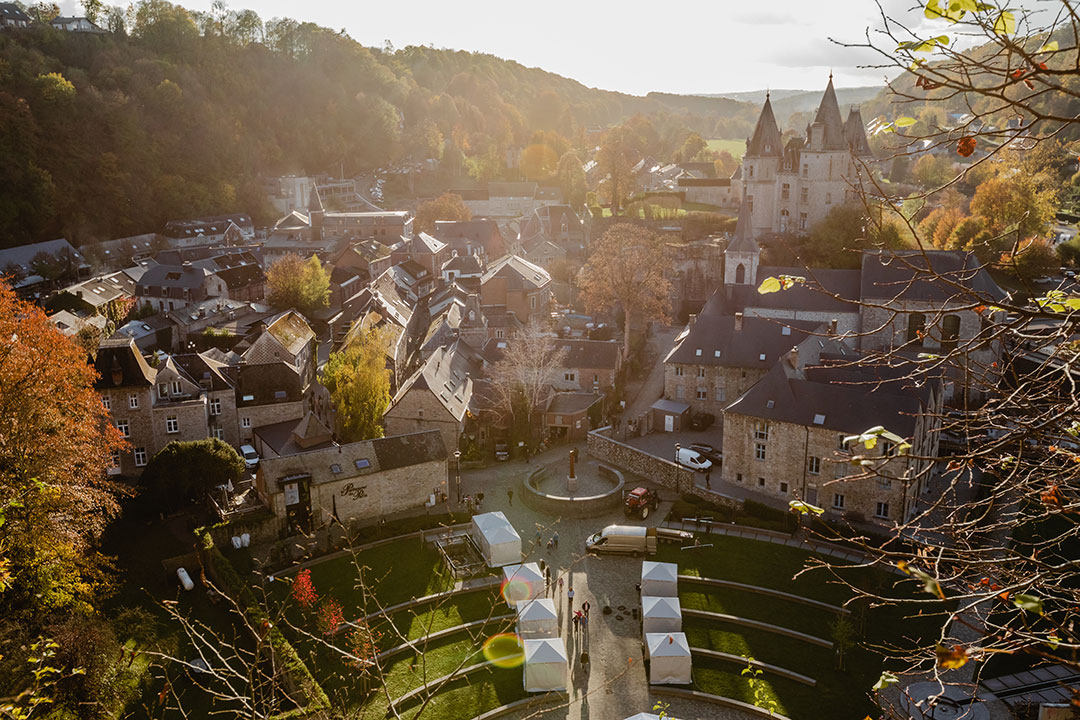 The city of Durbuy, located in the south of Belgium, in what’s called ‘the Ardennes’. It’s situated in the French-speaking part of the country. Due to the relatively high amount of tourists, most of the locals also speak English, which makes it easier for nonresidents to communicate around here. We’ll give you a few reasons why Durbuy is worth a visit:

First of all; stroll around Durbuy without any time pressure. The city is small but it’s absolutely lovely. As told, in earlier times Durbuy was a ‘big’ medieval city with high importance. Therefore you can still find medieval architecture in its most beautiful and pure form. The entire city has a kind of fairy tale look, with loads of tiny houses, cobblestone streets and tiny alleys. That’s why we advise you to take your time and just let yourself get lost in this small town. For sure it’s impossible to get lost, so one way or another, you will end up at the central place again. 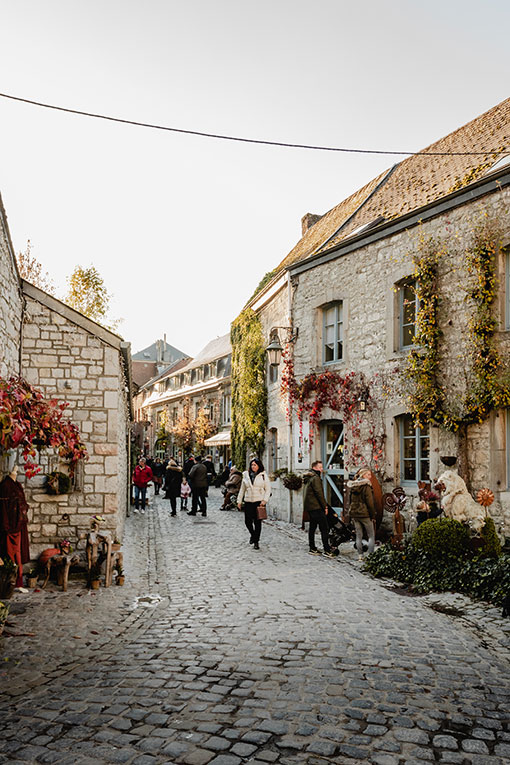 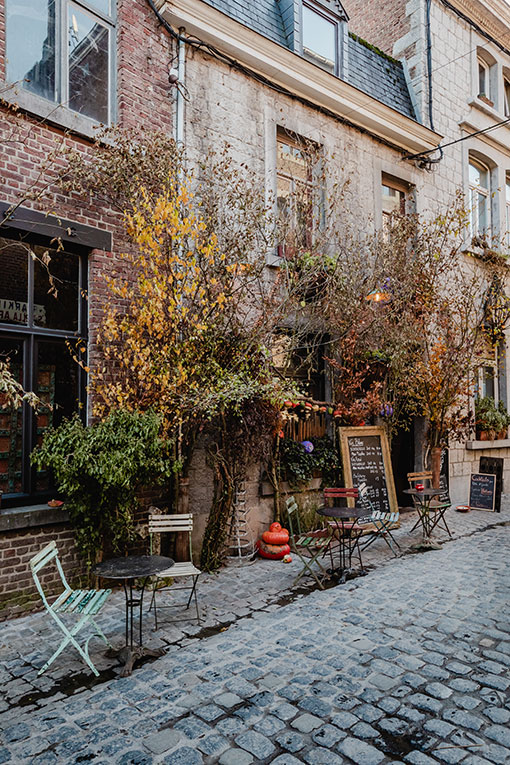 Durbuy Castle, or Chateau de Durbuy, is one of the many highlights of this city. It is located close to the city centre so therefore impossible to oversee. As the castle is privately owned, unfortunately, it is closed for public, but even on the outside, it’s a true beauty. Another highlight that is accessible for the public is the Topiary Park. This park has one of the largest topiary gardens in the whole world and it’s much larger than it might look at first sight. It’s not difficult to get lost in this beauty and you can easily spend a few hours over here. Cost price is €4,5 per person and the park is open from February till the end of December.

Another thing that’s not to miss as a non-Belgian tourist is our famous chocolate. Although Switzerland is best known for its chocolate, without doubt, it is still Belgian chocolates which are worlds best (we don’t need scientific proof for this). And while you’re tasting the Belgian chocolate, grab a moment of your time to drink a good Belgian beer! 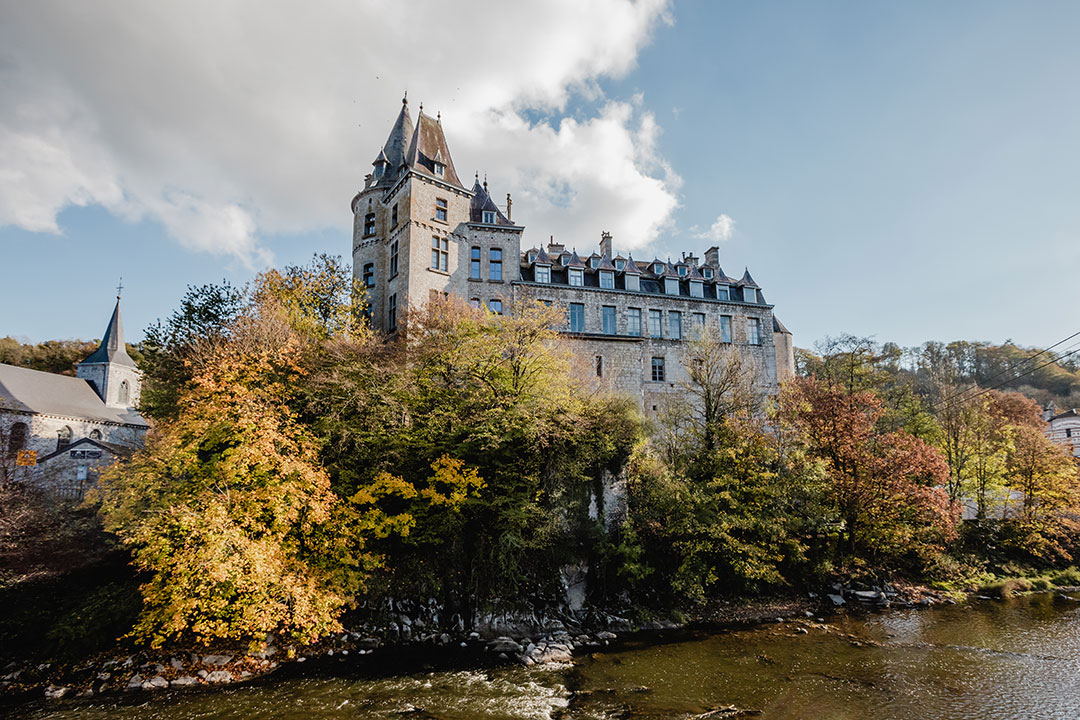 The town of Durbuy has one giant rock formation, which is over 300 million years old. While you’re on top of it, you’re looking at a beautiful sight over the town. This anticline is known as Homalius Rock or the ‘Roche à la Falize’. The anticline is the geological term for this particular type of U-shaped rock formation. The layers of this dome-shaped fold were formed by layer upon layer of sea-sediments accumulating during millions of years.

We hiked up the rock at sunset and it was stunning. You’ll see the lowering sun covering the city in shadows and it’s a beautiful spectacle to watch from above. From up here, you’ll have an eagle’s view of the city and although it might be forbidden to climb up there, it is worth it… Obviously, we don’t need to say you have to be careful up there.

When the evening falls, find yourself a good restaurant in Durbuy and to be honest, this isn’t a hard job. There are plenty of good restaurants in Durbuy and they are all situated around the central square, so the choice is fairly easy to make. You can even find some Gault Millau rated restaurants here, owned by our star chef Wout Bru. Unfortunately, we forgot to make reservations, which resulted in the fact there was no more place. But the location and the interior is so beautiful and the chef is one of the best in Belgium, so we can only assume the food will be as good as they say. Of course, feel free to try yourself. 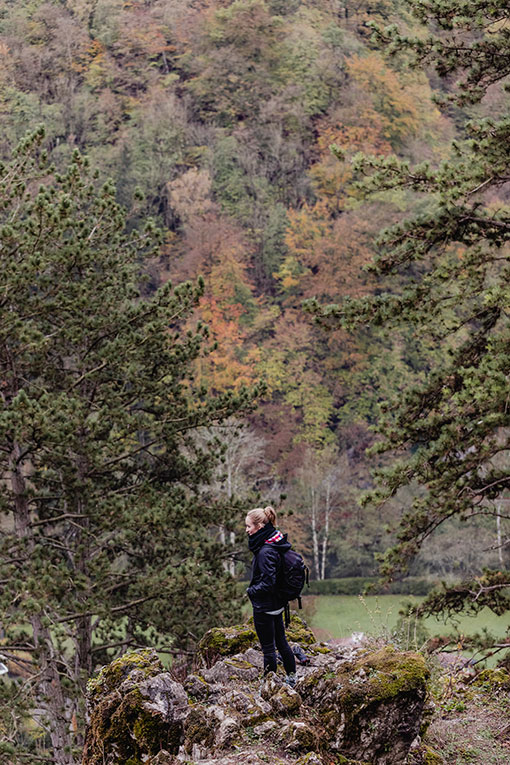 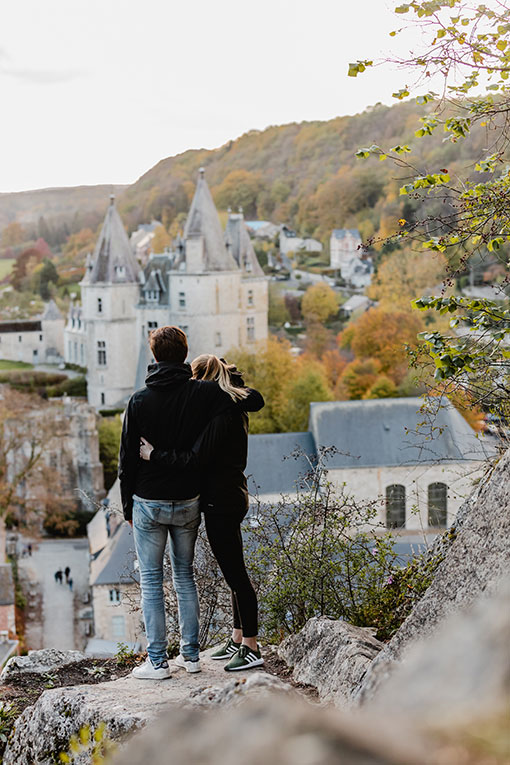 Although many people will suggest visiting Durbuy as a day trip when visiting Belgium, we strongly recommend to stay here for more than one day and include an overnight stay in Durbuy. There are plenty of ‘old’ cottages and also different accommodations to stay the night, so it’s worth staying more than one day.

We stayed at Adventure valley, which is a great outdoor park in Durbuy. We decided to book a glamping tent for the night and even though it was pretty cold in November, it was still a great idea to spend the night outdoors.

You’ll be busy the whole day if you are eager to explore every corner and all the different local shops and opportunities served here. When staying another day, we also recommend making a day hike around Durbuy on your 2nd day. The forests are wonderful and especially in autumn, they’re very colourful. It’s the perfect activity to get out of the daily rush and be amazed by all nature has to offer. Even though you might not find a bunch of wildlife in the Belgian woods, the rest and peace you find in this forest are absolutely refreshing. Take this literally, because it can get cold in Belgium in autumn. The river crossing through Durbuy is the Ourthe. The picturesque landscapes surrounding the river also makes it the perfect scenery for a relaxing walk along the shore of the river. 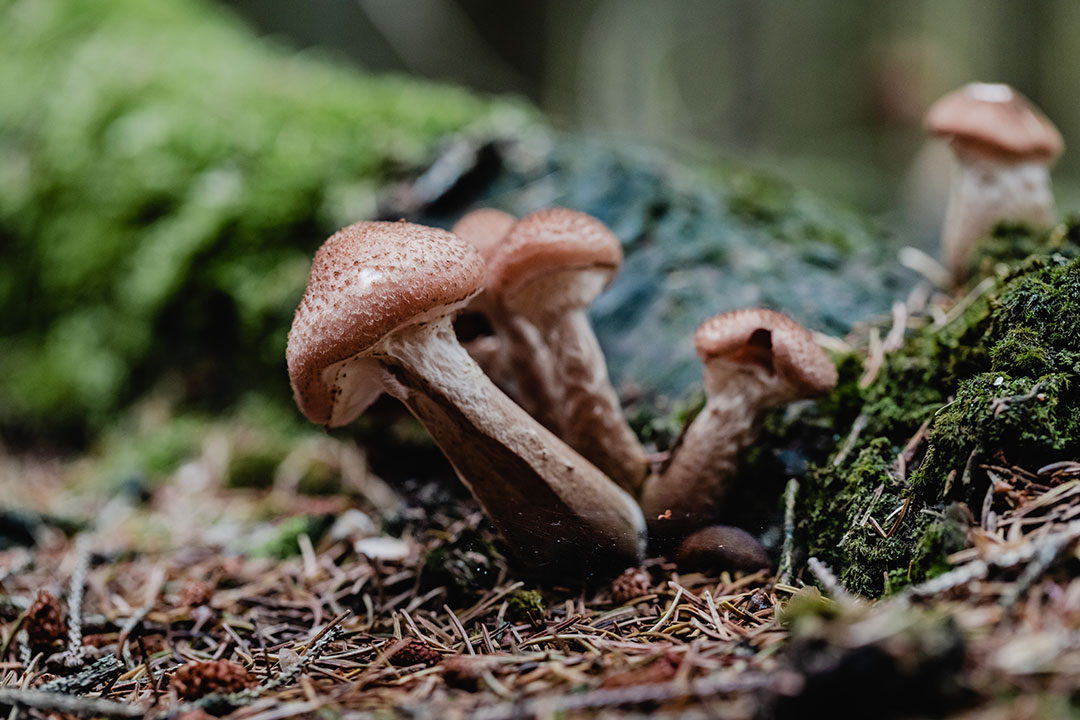 Autumn is a good time to visit Durbuy, but this small town also has plenty to offer during the winter holidays. The fact that the city is so small, you can put the word cosy at the beginning of every sentence. Even though it’s a small city, Durbuy has one of the cosiest and one of the best winter/Christmas markets in Belgium. You’ll find quality crafts, gifts and lots of decorating ideas for your Christmas table. And once you’ve had your Christmas snacks, enjoy the ice rink on the market. 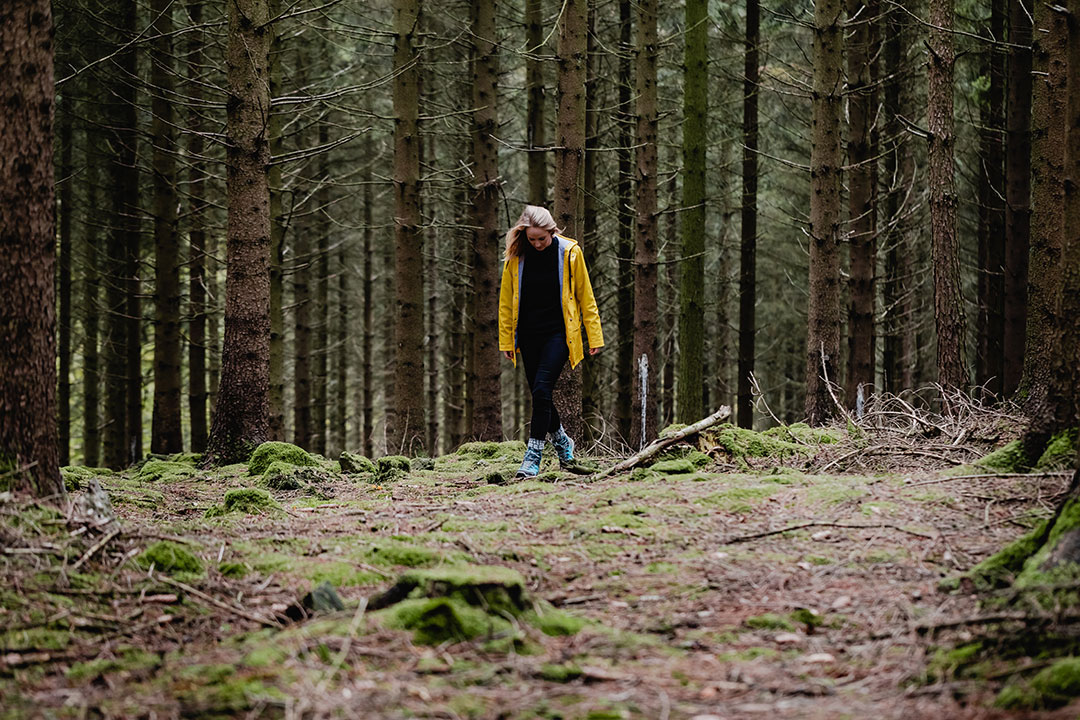 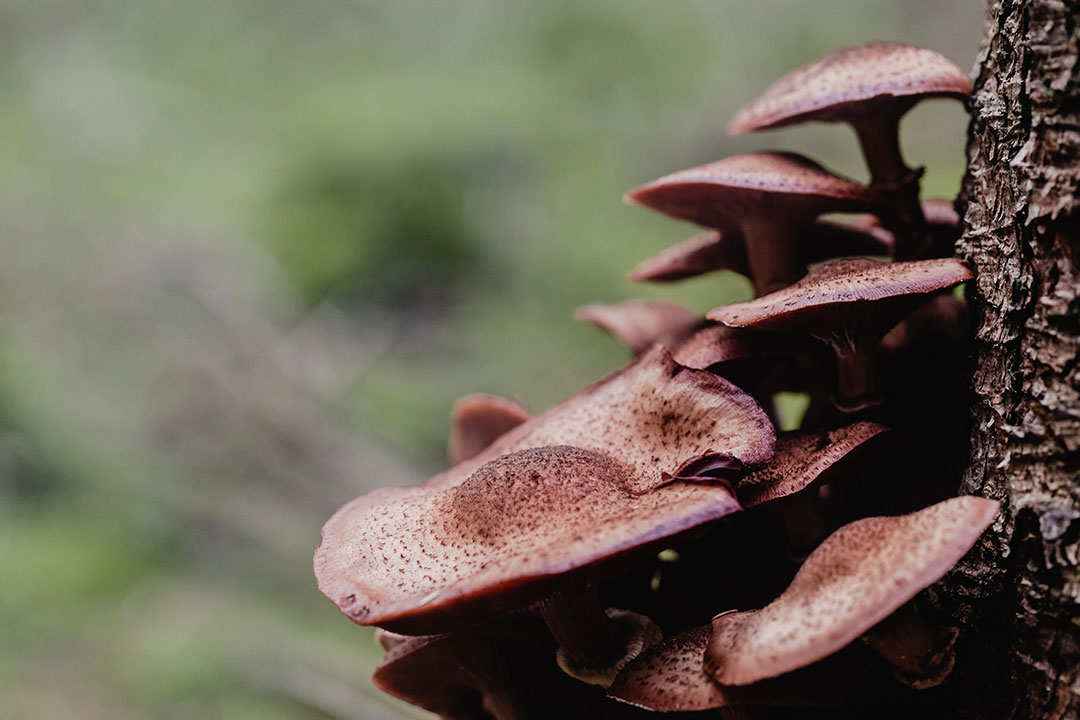 Don’t miss out on the newest travel updates.